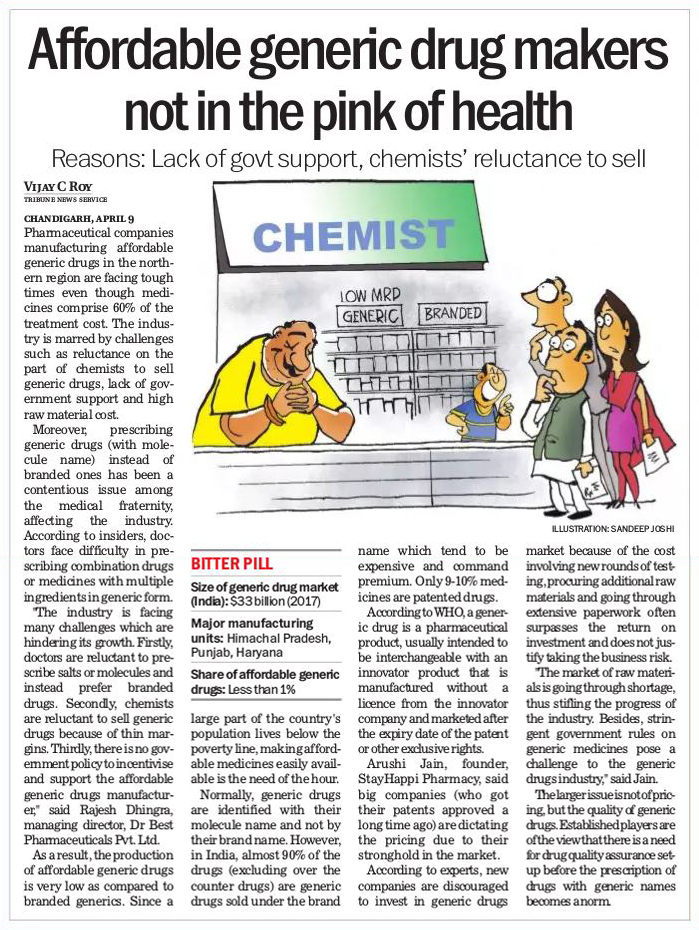 Pharmaceutical companies manufacturing affordable generic drugs in the northern region are facing tough times even though medicines comprise 60% of the treatment cost.The industry is marred by challenges such as reluctance on the part of chemists to sell generic drugs, lack of government support and high raw material cost.

Moreover prescribing generic drugs (with molecule name)  instead of branded ones has been a contentious issue among the medical fraternity, affecting the industry. According to insiders, doctors face difficulty prescribing combination drugs or medicineswith multiple ingredients in generic form.

“The industry is facing many challenges which are hindering its growth. Firstly, doctors are reluctant to prescribe salts or molecules and instead prefer branded drugs. Secondly, chemists are reluctant to sell generic drugs because of thin mar-gins. Thirdly, there is no government policy to incentivise and support the affordable generic drugs manufacture,” said Rajesh Dhingra, managing director, Dr Best Pharmaceuticals Pvt. Ltd.

As a result, the production of affordable generic drugs is very low as compared to branded generics. Since a large part of the country’s population lives below the poverty line, making affordable medicines easily available is the need of the hour.

Normally, generic drugs are identified with their molecule name and not by their brand name. However, in India, almost 90% of the drugs (excluding over the counter drugs) are generic drugs sold under the brand name which tend to be expensive and command premium. Only 9-10% medicines are patented drugs.

According to WHO, a generic drug is a pharmaceutical product, usually intended to be interchangeable with an innovator product that is manufactured without a licence from the innovator company and marketed after the expiry date of the patent or other exclusive rights.

Arushi Jain, founder StayHappi Pharmacy, said big companies (who got their patents approved a long time ago) are dictating the pricing due to their stronghold in the market.

According to experts, new companies are discouraged to invest in generic drugs
market because of the cost involving new rounds of testing, procuring additional raw miteriais and going through extensive paperwork often surpasses the return on investment and does not justify taking the business risk.

“The market of raw materials is going through shortage, thus stifling the progress of the industry. Besides, stringent government rules on generic medicines pose a challenge to the generic drugs industry,” said Jain.

The larger issue is not of pricing, but the quality of generic drugs. Established players are of the view that there is a need for drug quality assurance setup before the prescription of drugs with generic names becomes a norm.