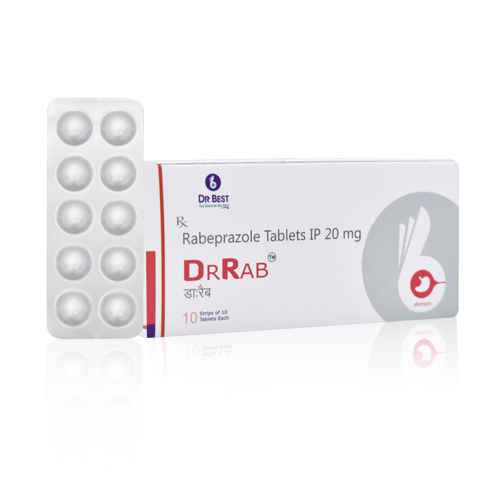 M.O.A. : Rabeprazole belongs to class of medications called proton pump inhibitors. It blocks the activity of the proton pumps in the stomach wall that produce acid, thereby reducing the amount of acid produced in the stomach

Rabeprazole Sodium is an enteric-coated (gastro-resistant) tablet formulation of rabeprazole sodium. This presentation is necessary because rabeprazole is acid-labile.

Absorption of rabeprazole therefore begins only after the tablet leaves the stomach. Absorption is rapid, with peak plasma levels of rabeprazole occurring approximately 3.5 hours after a 20mg dose. Peak plasma concentrations (Cmax) of rabeprazole and AUC are linear over the dose range of 10mg to 40mg. Absolute bioavailability of an oral 20mg dose (compared to intravenous administration) is about 52% due in large part to pre-systemic metabolism. Additionally the bioavailability does not appear to increase with repeat administration. In healthy subjects the plasma half-life is approximately one hour (range 0.7 to 1.5 hours), and the total body clearance is estimated to be 283 ± 98 ml/min. There was no clinically relevant interaction with food. Neither food nor the time of day of administration of the treatment affect the absorption of rabeprazole sodium.

Rabeprazole sodium, as is the case with other members of the proton pump inhibitor (PPI) class of compounds, is metabolised through the cytochrome P450 (CYP450) hepatic drug metabolising system. In vitro studies with human liver microsomes indicated that rabeprazole sodium is metabolised by isoenzymes of CYP450 (CYP2C19 and CYP3A4). In these studies, at expected human plasma concentrations rabeprazole neither induces nor inhibits CYP3A4; and although in vitro studies may not always be predictive of in vivo status these findings indicate that no interaction is expected between rabeprazole and cyclosporin. In humans the thioether (M1) and carboxylic acid (M6) are the main plasma metabolites with the sulphone (M2), desmethyl-thioether (M4) and mercapturic acid conjugate (M5) minor metabolites observed at lower levels. Only the desmethyl metabolite (M3) has a small amount of anti-secretory activity, but it is not present in plasma.

Be the first to review “DR RAB” Cancel reply