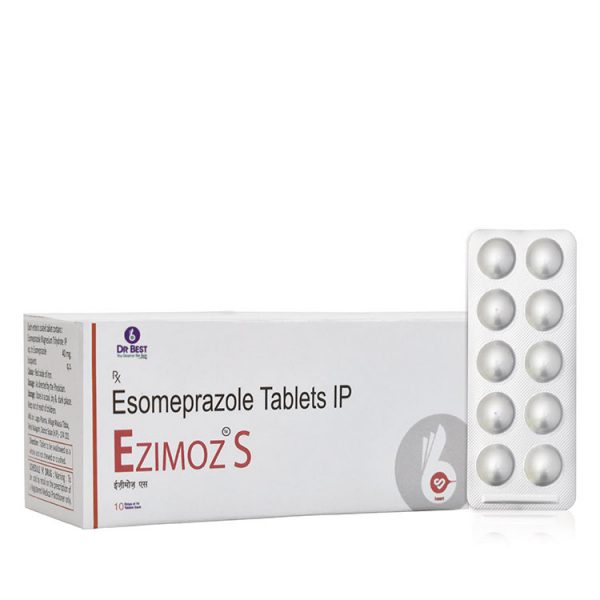 M.O.A: Esomeprazole belongs to class of medications called proton pump inhibitors. It blocks the activity of the proton pumps in the stomach wall that produce acid, thereby reducing the amount of acid produced in the stomach.

Esomeprazole is acid labile and is administered orally as gastro-resistant granules. In vivo conversion to the R-isomer is negligible. Absorption of esomeprazole is rapid, with peak plasma levels occurring approximately 1-2 hours after dose. The absolute bioavailability is 64% after a single dose of 40 mg and increases to 89% after repeated once-daily administration. For 20 mg esomeprazole the corresponding values are 50% and 68% respectively. Food intake both delays and decreases the absorption of esomeprazole although this has no significant influence on the effect of esomeprazole on intragastric acidity.

The parameters below reflect mainly the pharmacokinetics in individuals with a functional CYP2C19 enzyme, extensive metabolisers.

Total plasma clearance is about 17 l/h after a single dose and about 9 l/h after repeated administration.

The plasma elimination half-life is about 1.3 hours after repeated once-daily dosing. Esomeprazole is completely eliminated from plasma between doses with no tendency for accumulation during once-daily administration.

DOSAGE:  As directed by the physician

Be the first to review “EZIMOZ S” Cancel reply