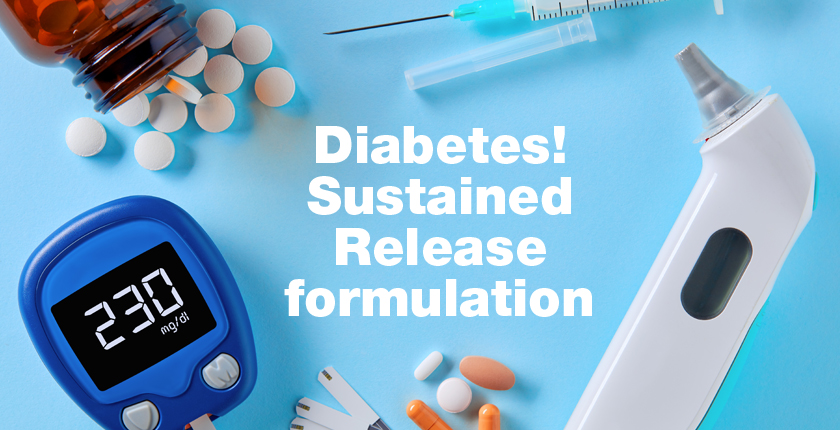 In India, on an average, more than 80% of people are suffering from diseases (either chronic or temporary), and for their treatment and management, they depend on medicine. The medicines are available in both conventional dosage form (immediate release dosage form) as well as modified drug release dosage form (i.e. sustained release).
So let us enlighten you,
what is sustained release formulation and why it is prefered over conventional one?
During the formulation of any medicine, patient compliance and safety is the primary concern.

Sustained release formulation serves a vital role in the management of chronic diseases such as Diabetes Mellitus (DM). In the current scenario, India has the largest number of patient with diabetes in the world. So, almost everyone is familiar with DM.
So let us discuss,
A brief about what is diabetes? What is the third line antidiabetic drug? Also, why sustained release antidiabetic drug is more beneficial?

What is Diabetes?
Diabetes is a chronic metabolic disorder, in which blood glucose/sugar level raised.
In case of diabetes mellitus, the beta cells of the pancreas are no longer able to make insulin (a hormone that regulates the tissues uptake of glucose) or unable to utilize the insulin present in the body.
Diabetes mellitus is of two types,

The management of diabetes mellitus can be done by both lifestyle modification as well as proper antidiabetic medication.
Glimepiride + Metformin + Voglibose is the third line antidiabetic drug for the management of type 2 diabetes mellitus.
It is the most widely prefered drug when diet, exercise, single therapy, as well as combination therapy (second line drug) is unable to control the raised blood glucose level.
It is available in the form of sustained release formulation.

It is the combination therapy of glimepiride (sulfonylurea), metformin (biguanides) and voglibose (alpha-glucosidase inhibitor).

Side effects related to the glimepiride+metformin+voglibose combination
USFDA approved it as a safe and effective third line drug for the management of type2 DM.
Some common side effects are Nausea, flatulence, stomach pain, hypoglycemia (low blood sugar level), diarrhoea, headache and skin rashes.