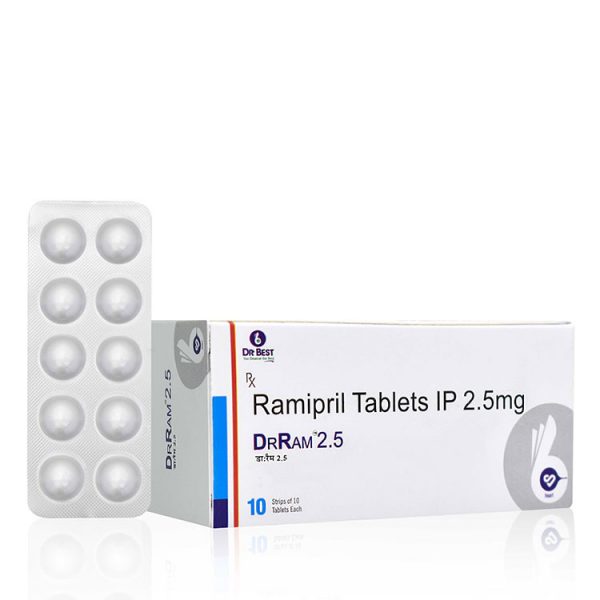 Following oral administration of Ramipril, peak plasma concentrations (Cmax) of Ramipril are reached within 1 hour. The extent of absorption is at least 50% to 60%, and is not significantly influenced by the presence of food in the gastrointestinal tract, although the rate of absorption is reduced.

In a trial in which subjects received Ramipril capsules or the contents of identical capsules dissolved in water, dissolved in apple juice, or suspended in applesauce, serum Ramiprilat levels were essentially unrelated to the use or non-use of the concomitant liquid or food.

Cleavage of the ester group (primarily in the liver) converts Ramipril to its active diacid metabolite, Ramiprilat. Peak plasma concentrations of Ramiprilat are reached 2 to 4 hours after drug intake. The serum protein binding of Ramipril is about 73% and that of Ramiprilat about 56%; in vitro, these percentages are independent of concentration over the range of 0.01 mcg/mL to 10 mcg/mL.

In patients with creatinine clearance <40 mL/min/1.73 m2, peak levels of Ramiprilat are approximately doubled, and trough levels may be as much as quintupled. In multiple-dose regimens, the total exposure to Ramiprilat (AUC) in these patients is 3 to 4 times as large as it is in patients with normal renal function who receive similar doses.

In patients with impaired liver function, the metabolism of Ramipril to Ramiprilat appears to be slowed, possibly because of diminished activity of hepatic esterases, and plasma Ramipril levels in these patients are increased about 3-fold. Peak concentrations of Ramiprilat in these patients, however, are not different from those seen in subjects with normal hepatic function, and the effect of a given dose on plasma ACE activity does not vary with hepatic function.

After oral administration of Ramipril, about 60% of the parent drug and its metabolites are eliminated in the urine, and about 40% is found in the feces. Drug recovered in the feces may represent both biliary excretion of metabolites and/or unabsorbed drug, however the proportion of a dose eliminated by the bile has not been determined. Less than 2% of the administered dose is recovered in urine as unchanged Ramipril.

The urinary excretion of Ramipril, Ramiprilat, and their metabolites is reduced in patients with impaired renal function. Compared to normal subjects, patients with creatinine clearance <40 mL/min/1.73 m2had higher peak and trough Ramiprilat levels and slightly longer times to peak concentrations.

DOSAGE:   As directed by the Physician

Be the first to review “DR RAM 2.5” Cancel reply