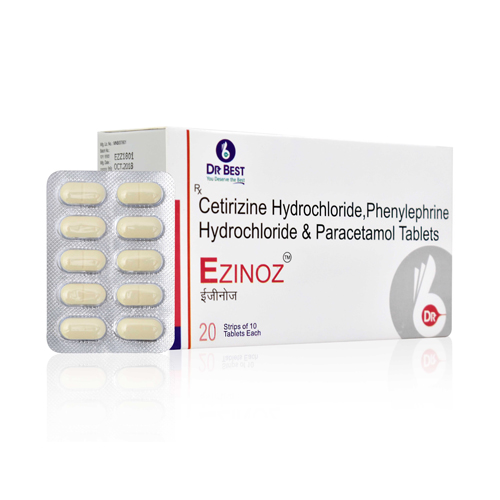 Description:
Cetirizine is one of the most prefered OTC drug for the effective treatment of allergic conditions. Cetirizine is a hydroxyzine derivative and a second-generation H1 Histamine blocker (antihistamine drug). It is approved by USFDA as a safe and effective drug for the treatment of various allergic conditions such as sneezing, coughing, nasal congestion, conjunctivitis (red and itchy eyes), hives (urticaria), eczema, reaction to insects bite and sting and some food allergy.

Paracetamol is an analgesic (relieve pain) and antipyretic (reduce fever) drug. It is the most commonly taken analgesics medicine worldwide.

Phenylephrine is a sympathomimetic amine and a selective alpha-1 adrenergic receptor agonist (activator). It is the most widely preferred over the counter (OTC) medication for the treatment of nasal decongestion.

The combination tablet of Cetrizine hydrochloride, Paracetamol and Phenylephrine hydrochloride is used for the temporary treatment of symptoms caused by flu, common cold, allergies, stuffy nose and ear congestion.

Paracetamol: Paracetamol has an analgesic (pain killer) and antipyretic (reduce fever) property. It produces analgesia by blocking chemical messengers in the brain that causes pain and show antipyretic activity by acting on the hypothalamus (a gland present in the brain and is responsible for regulating the body temperature).

Phenylephrine: Phenylephrine is a direct-acting sympathomimetic drug (mimics the action of adrenaline or epinephrine). Adrenaline is a hormone, neurotransmitter and medication that prepare the body for fight or flight.
It selectively binds to alpha-1 receptors and cause vasoconstriction (constriction or narrowing of the blood vessel) and increases systolic/diastolic pressure.
Along with a selective alpha-1 receptor agonist, it serves numerous role in the body as a,

Be the first to review “EZINOZ” Cancel reply