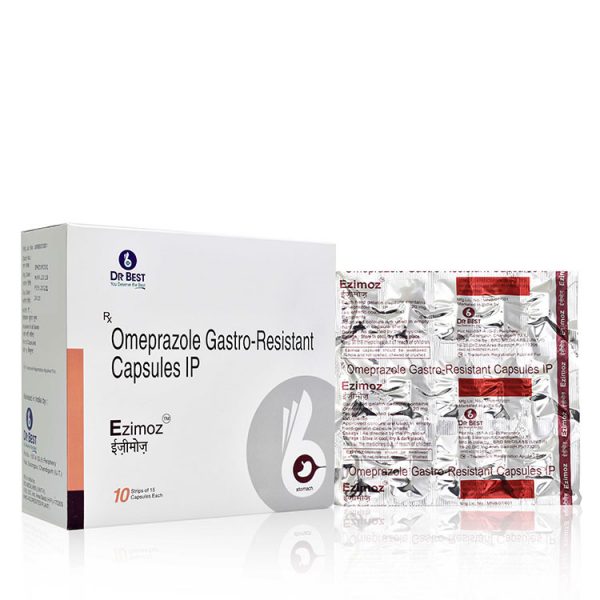 Omeprazole belongs to class of medications called proton pump inhibitors. It blocks the activity of the proton pumps in the stomach wall that produce acid, thereby reducing the amount of acid produced in the stomach.

PRILOSEC Delayed-Release Capsules contain an enteric-coated granule formulation of omeprazole (because omeprazole is acid-labile), so that absorption of omeprazole begins only after the granules leave the stomach. Absorption is rapid, with peak plasma levels of omeprazole occurring within 0.5 to 3.5 hours. Peak plasma concentrations of omeprazole and AUC are approximately proportional to doses up to 40 mg, but because of a saturable first-pass effect, a greater than linear response in peak plasma concentration and AUC occurs with doses greater than 40 mg. Absolute bioavailability (compared with intravenous administration) is about 30-40% at doses of 20-40 mg, due in large part to presystemic metabolism. In healthy subjects the plasma half-life is 0.5 to 1 hour, and the total body clearance is 500-600 mL/min.

Based on a relative bioavailability study, the AUC and Cmax of PRILOSEC (omeprazole magnesium) for Delayed-Release Oral Suspension were 87% and 88% of those for PRILOSEC Delayed-Release Capsules, respectively.

The bioavailability of omeprazole increases slightly upon repeated administration of PRILOSEC Delayed-Release Capsules.

Following single dose oral administration of a buffered solution of omeprazole, little if any unchanged drug was excreted in urine. The majority of the dose (about 77%) was eliminated in urine as at least six metabolites. Two were identified as hydroxyomeprazole and the corresponding carboxylic acid. The remainder of the dose was recoverable in feces. This implies a significant biliary excretion of the metabolites of omeprazole. Three metabolites have been identified in plasma -the sulfide and sulfone derivatives of omeprazole, and hydroxyomeprazole. These metabolites have very little or no antisecretory activity.

Be the first to review “EZIMOZ” Cancel reply