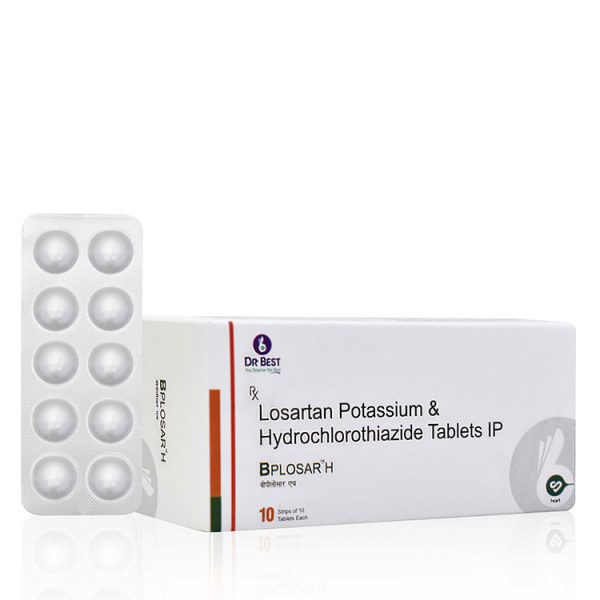 Losartan belongs to a class of medications called angiotensin II receptor antagonists. It works by blocking the action of certain natural substances that tighten the blood vessels and also by inhibiting the aldosterone secreting effect of angiotensin II, allowing the blood to flow more smoothly and the heart to pump more efficiently.
Hydrochlorothiazide belongs to class of medications called thiazide diuretics. It acts by eliminating the fluid and salts from the body. It works on the kidneys to produce more urine which removes extra water and certain salts from the body which in turn lowers blood pressure and swelling.

Losartan
Following oral administration, losartan is well absorbed and undergoes first-pass metabolism, forming an active carboxylic acid metabolite and other inactive metabolites. The systemic bioavailability of losartan tablets is approximately 33%. Mean peak concentrations of losartan and its active metabolite are reached in 1 hour and in 3-4 hours, respectively. There was no clinically significant effect on the plasma concentration profile of losartan when the drug was administered with a standardized meal.

Losartan
Both losartan and its active metabolite are ≥99% bound to plasma proteins, primarily albumin.The volume of distribution of losartan is 34 litres. Studies in rats indicate that losartan crosses the blood-brain barrier poorly, if at all.

DOSAGE: As directed by the physician.

Be the first to review “BPLOSAR H” Cancel reply