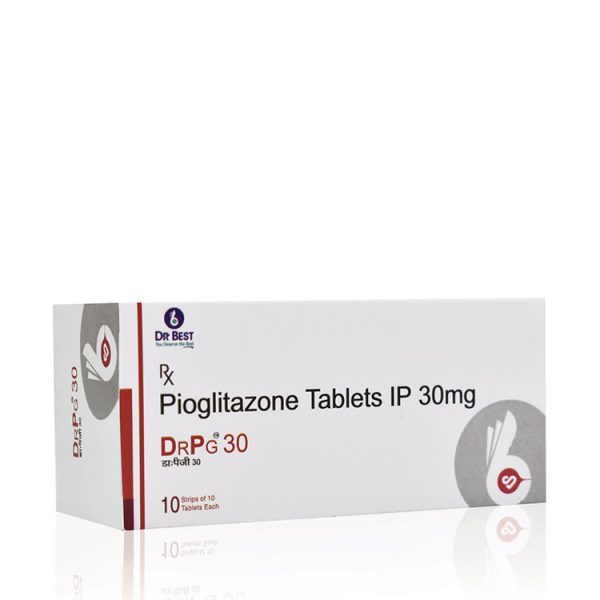 This Medication contains Pioglitazone 30 mg which is used to treat type 2 diabetes mellitus. It control blood sugar level and prevent serious complications of diabetes like kidney damage and blindness.

Pioglitazone belongs to class of thiazolidinedione. Pioglitazone decreases insulin resistance in the periphery and in the liver that helps the body make better use of insulin it produces and also decreases the glucose output from
the liver.

Following oral administration, pioglitazone is rapidly absorbed, and peak plasma concentrations of unchanged  pioglitazone are usually achieved 2 hours after administration. Proportional increases of the plasma  concentration were observed for doses from 2 – 60 mg. Steady state is achieved after 4–7 days of dosing.  Repeated dosing does not result in accumulation of the compound or metabolites. Absorption is not influenced  by food intake. Absolute bioavailability is greater than 80 %.

The estimated volume of distribution in humans is 0.25 l/kg. Pioglitazone and all active metabolites are  extensively bound to plasma protein (> 99 %).

Pioglitazone undergoes extensive hepatic metabolism by hydroxylation of aliphatic methylene groups.  This is predominantly via cytochrome P450 2C8 although other isoforms may be involved to a lesser degree.  Three of the six identified metabolites are active (M-II, M-III, and M-IV).When activity, concentrations and  protein binding are taken into account, pioglitazone and metabolite M-III contribute equally to efficacy.  On this basis M-IV contribution to efficacy is approximately three-fold that of pioglitazone, whilst the relative  efficacy of M-II is minimal.In vitro studies have shown no evidence that pioglitazone inhibits any subtype of  cytochrome P450. There is noinduction of the main inducible P450 isoenzymes 1A, 2C8/9, and 3A4 in man. Interaction studies have shown that pioglitazone has no relevant effect on either the pharmacokinetics or  pharmacodynamics of digoxin, warfarin, phenprocoumon and metformin. Concomitant administration of  pioglitazone with gemfibrozil (an inhibitor of cytochrome P450 2C8) or with rifampicin (an inducer of  cytochrome P450 2C8) is reported to increase or decrease, respectively, the plasma concentration of  pioglitazone.

DOSAGE :  As directed by the physician

Be the first to review “DR PG 30” Cancel reply