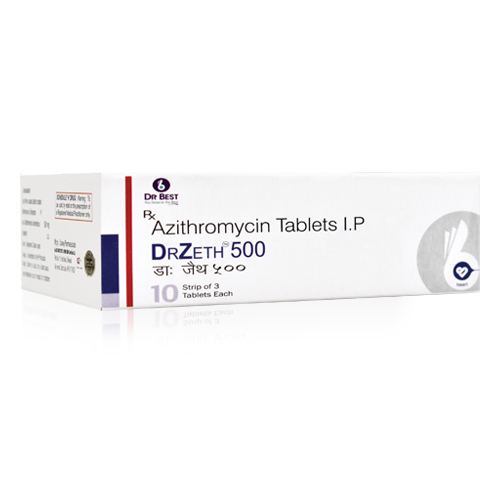 Azithromycin belongs to a class of medications called macrolide antibiotics. Azithromycin works by killing bacteria by preventing them from reproducing and repairing themselves.

The 1 gram single-dose packet is bioequivalent to four 250 mg azithromycin capsule When the oral suspension of azithromycin was administered with food, the Cmax increased by 46% and the AUC by 14%. The absolute bioavailability of two 600 mg tablets was 34% (CV=56%). Administration of two 600 mg tablets with food increased Cmax by 31% (CV=43%) while the extent of absorption (AUC) was unchanged (mean ratio of AUCs=1.00; CV=55%).

The serum protein binding of azithromycin is variable in the concentration range approximating human exposure, decreasing from 51% at 0.02 μg/mL to 7% at 2 μg/mL.

The antibacterial activity of azithromycin is pH related and appears to be reduced with decreasing pH. However, the extensive distribution of drug to tissues may be relevant to clinical activity.

Azithromycin has been shown to penetrate into tissues in humans, including skin, lung, tonsil, and cervix. Extensive tissue distribution was confirmed by examination of additional tissues and fluids (bone, ejaculum, prostate, ovary,uterus, salpinx, stomach, liver, and gallbladder). As there are no data from adequate and well-controlled studies of azithromycin treatment of infections in these additional body sites, the clinical importance of these tissue concentration data is unknown.

Following oral administration of a single 1200 mg dose (two 600 mg tablets), the mean maximum concentration in peripheral leukocytes was 140 μg/mL. Concentration remained above 32 μg/mL, for approximately 60 hr. The mean half-lives for 6 males and 6 females were 34 hr and 57 hr, respectively. Leukocyte-to-plasma Cmax ratios for males and females were 258 (±77%) and 175 (±60%), respectively, and the AUC ratios were 804 (±31%) and 541 (±28%) respectively. The clinical relevance of these findings is unknown.

Following oral administration of multiple daily doses of 600 mg (1 tablet/day) to asymptomatic HIV-positive adults, mean maximum concentration in peripheral leukocytes was 252 μg/mL (±49%). Trough concentrations in peripheral leukocytes at steady-state averaged 146 μg/mL (±33%). The mean leukocyte-to-serum Cmax ratio was 456 (±38%) and the mean leukocyte to serum AUC ratio was 816 (±31%). The clinical relevance of these findings is unknown.

In vitro and in vivo studies to assess the metabolism of azithromycin have not been performed.

Plasma concentrations of azithromycin following single 500 mg oral and IV doses declined in a polyphasic pattern resulting in an average terminal half-life of 68 hr. Biliary excretion of azithromycin, predominantly as unchanged drug, is a major route of elimination. Over the course of a week, approximately 6% of the administered dose appears as unchanged drug in urine.

SIDE EFFECTS : Pain in the stomach and intestine, Nausea and vomiting, Diarrhea, Headache.

Be the first to review “DR ZETH 500” Cancel reply