Respiratory tract diseases affect the lungs and other parts of the respiratory system.

According to a study published in Chronic obstructive pulmonary disease: Journal of the COPD Foundation, the prevalence of chronic bronchitis (CB) varies throughout the world, varies from 3.4%–22.0% in the general population to up to 74.1% in patients with COPD. CB is known as the cough and sputum production for at least 3 months in a year for at least 2 repeated years.

Chronic obstructive pulmonary disease (COPD) is an umbrella term that encompasses several respiratory illnesses that cause breathlessness, or the inability to exhale normally.
Mucus hypersecretion is considered to be a risk factor for increased morbidity in patients suffering from respiratory diseases like COPD, asthma, and cystic fibrosis. Excessive mucus production accompanied by an insufficient mucus clearance may further hamper the air passage by clogging the already obstructed airways.

Many medications are available which help to alter the properties of airway secretion or block mucus production or release, or even both!

The mucolytics are responsible for the disruption of the mucous gel, generally by altering the degree of the cross-linking or the interactions between molecules in the gel. They are used to thin the mucus, making it less thick and sticky and easier to cough up.
The presently used treatments for COPD focus on bronchodilation and mucolytic. The bronchodilators help to relax the muscles that surround the airways and allow the airways (the tubes that carry air into and out of the lungs) to open up.

Acebrophylline is a bronchodilator to treat or prevent medical conditions for example blockage or irritation in the airways, acute or CB, and recurrence of chronic bronchitis, chest tightness and inflammation in lungs and, other some airways/breathing-related problems. The main constituents of Acebrophylline are ambroxol and theophylline-7 acetic acid which possess anti-inflammatory properties and reduces the frequency of episodes of bronchial obstruction and lessens the need for beta2-agonists. 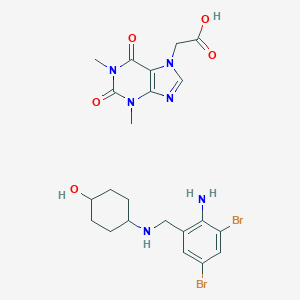 Acebrophylline is a bronchodilator and mucolytic which works to makes the breathing process easy. It helps to relax the muscles connected and attached with the airways. Its makes the mucus thin and loosens its grip. It also stops the discharge of inflammatory chemicals like leukotriene, etc. in the lungs thereby reducing the inflammation in the lungs and blockade in the chronic stages.

Uses of Acebrophylline:
This medicine is recommended for:

Dosage:
There are various factors to be considered regarding the drug dosage. These are:

Recommended dosage for adults: 100 mg twice daily; To avoid gastrointestinal uneasiness, it is always advised to be taken after food.

Possible Side effects:
The patients may undergo some minor and major (severe) side effects or adverse effects after the continued intake of the drug. Some of the most common ones are as follows:

Seek immediate medical assistance in case of any other side effect or worsening of side effect.

Warnings and precautions:
It is not indicated in pregnant or breastfeeding women, without proper instructions by the physician. It is not advisable to be used in the elderly due to the possibility of its side effects.

It is not a substitute for an asthma inhaler. In case of an asthma attack, it won’t provide quick relief as compared to using an inhaler.
Avoid its consumption if one is allergic to any of its components, or if have an Acute Myocardial infection.

Smoking or alcohol consumption can lower the action of this medicine, so do not smoke or drink alcohol. It must not be consumed with caffeine, as it may lead to a severe reaction.

Acebrophylline is contraindicated in patients with: Ambroxol allergy, impaired blood flow through the cavities of the heart and all blood vessels, liver and kidney disorders, gastrointestinal disorders, seizure, irregular heartbeat, heart failure and the excessive amount of thyroid hormones produced by the thyroid gland.

This newer bronchodilator has been proved as a better choice as compared to older- Theophylline for COPD patients having cardiovascular co-morbidity.

Acebrophylline is available as 100 mg capsules under the brand name- EZIKLIK 100 with an 80% lesser price at Dr Best Pharmaceuticals Pvt Ltd.